Blessings from Biz, Gifts from Goose. 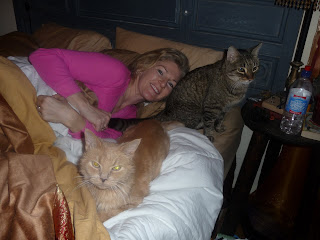 "Even after all this time, The sun never says to the earth,

It lights the Whole Sky." ~ Hafiz

It is 6 weeks since Goose said goodbye and 7 months since Biz did. So much has changed. So much loss, so much loneliness and so much to reflect upon as I am still in the cyclone of shift. The cyclone does not look like this from the outside. It is an internal storm of clashing thoughts and fragments of identity that can’t seem to settle down or coexist in some kind of harmony. The only way to align any of it is to write. Writing seems to help it all make sense ...at least to me it does. And that’s what matters, right?

I look at photos of my boys and think to myself ‘What are the gifts I get to take with me on the next leg of this journey and what are the blessings?’

The thing about Bizmarck that stood out was how grounded he was. Bizmarck was the centered one of the three of us. He owned his space and had very clear boundaries. If someone were to get too familiar with petting him or had an energy of treating him like a cat and not a Cat, he would let them know in no uncertain terms. It didn’t mean he didn’t care for you; he just didn’t care for being spoken down to or thought of as cute. His self-esteem was grand and his intellect was high. He was direct in his approach for asking for things and frankly, it is what always got him his way. His requests had an unwavering expectancy that accompanied them. He was a true demonstration of ‘Ask and It Is Given.’ Bizmarck and I were partners in crime. While he depended on me for food, litter and shelter, I depended on him for consistency and groundedness…. all else was an equal playing field. The trade was fair and the dance harmonious.

Goose was a different boy all together. I was Goose’s mom without a doubt. He always asked permission and I always granted it. He looked to me for support, for safety and for security and I looked to him for actually the same things. We mirrored each other in countless ways. Goose was always the comedy cat in my eyes. He was funny, charming, witty and had a ton of issues…what comedian doesn’t? From early on Goose was diagnosed with obsessive-compulsive disorder. Later added were kidney stones and in his last years he had chronic irritable bowel, thyroid problems, possible lymphoma and what my vet inevitably thought was an auto-immune disorder that was untreatable. Good God! I am exhausted just to list it all, imagine what it was like to live it. Searching for the solutions for Goose’s issues was a full time job. The paycheck was a remedy and I wish I could say they were plentiful. Just about every new project we took on put us in a deficit. We’d seem to make progress and things just didn’t seem to pay off. The thing about this guy though was that amidst it all, he stayed in a really sweet and kind mood. Goose had every reason to be ‘pissy’ and he just wasn’t. He was truly grateful. Gratitude was his mode of operation. Goose was really eccentric too. He was a total fidget and could only be held near a door jam so that he could hold on to it from over my shoulder to feel stable. It was hilarious to witness. He was desperate for love and desperate for independence. A true Gemini he was…just like his mom. The thing about all of his ‘stuff’ was that I loved him no matter what. None of his issues made me like him or accept him less and none of my frustrations with his illnesses made him turn his back on me. We had it figured out and allowed for each other’s stuff’ to have equal space. When Bizmarck died, I looked at Goose and said “Holy Crap! The grounded one is gone and what are we two lunatics to do now?” But we figured it out and made a good final go of it.

Last night I had a total melt down. Their absence is one I face head on in one moment and then do a two-step around so I can just make it through the day. There’s no judging it. It just is and I take it one day at a time. Last night’s melt down was a sign to get back to the paper and pen and reassess.

So here I am. Forging ahead wearing new armor adorned with the blessings of boundaries, self-esteem, the courage to ask and boldness to expect, along with the gifts of gratitude, endurance, acceptance and laughter. These and so much more are the contributions my boys have made in my life. Biz asked for what he wanted and the sky did not fall down because he did. Goose had a million issues and not once was he ever abandoned or looked down upon. In a nutshell today: Just Ask and Just Be, Love will take care of the rest.

Posted by Joanne O'Brien at 5:04 PM No comments: